Due to licensing restrictions, this book is only available in the listed countries.

Convicted psychotic killer and extremist fanatic Edward "Mad Dog" Mastock violently escapes the guillotine's blade in the Tower of London to once again terrorize the Socialist Republic of Britain. But dogging Mastock's bloody footsteps is his longtime adversary and nemesis, Detective Inspector Archie LeBrock, at odds with Scotland Yard and intent on bringing Mastock's horrific murder spree to an end, once and for all. Aided by his friend and colleague Detective Roderick Ratzi, LeBrock follows the trail of carnage to Paris, otherwise known as Grandville, the largest city in a world dominated by the French Empire and the prime target of Mastock's sadistic terrorism. Can LeBrock capture Mad Dog before he can mete out his final vengeance, or will LeBrock's own quest for redemption be dragged to ground by the demons of his past?

• Grandville Mon Amour is the second in a planned series of Grandville graphic novels.

• The world of Grandville is described by Talbot as "like Jules Verne and Sherlock Holmes directed by Quentin Tarantino—with animals!"

• "Every panel is a work of art."—Booklist on Grandville 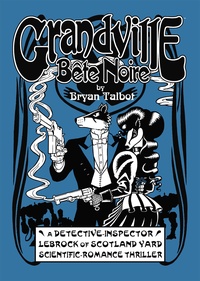 Red Virgin and the Vision of Utopia

The Tale of One Bad Rat