The Adventures of Luther Arkwright

Across a multitude of parallel universes, dark forces operate in the shadows, manipulating mankind's histories throughout countless timelines. The agents of these Disruptors all work with a single purpose—the recovery and activation of Firefrost, a long-hidden doomsday device whose unspeakable power is capable of consuming the galaxy in all its incarnations. Standing in the way of the Disruptors is Luther Arkwright, a human anomaly who exists only in a single universe, a man of vast psychic powers who is capable of traveling between the parallel realities to counter the Disruptors' malign influence. But the Disruptors are aware of Arkwright and his abilities, and while Arkwright searches the myriad Earths for the location of Firefrost, the agents of darkness race to destroy Arkwright…and to ensure their unthinkable ends.

• New scans from the original artwork!

• From the acclaimed creator of The Tale of One Bad Rat, Alice in Sunderland, and Grandville.

Heart of Empire: The Legacy of Luther Arkwright (Second Edition) 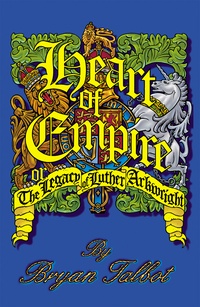