For years, as Miyamoto Usagi has wandered the countryside, an unseen, malevolent entity has been tracing his steps. Thought dead since the events of Grasscutter, the demon Jei—the Black Soul—has been inhabiting the body of the swordswoman Inazuma, intent on destroying the evil he claims to see in Usagi!

Meanwhile, Boss Bakuchi, shamed by his inability to avenge his son's death, doubles the bounty on the killer—Inazuma. The money brings out scores of bounty hunters, unaware that they are merely a flock of sparrows intent on bringing down an eagle.

The hunt for Inazuma also draws Usagi, hunters Gen and Stray Dog, and a mysterious stranger named Isamu, each with his own motive. As the threat of the Black Soul reemerges, this epic storyline reveals at last the true origin of Jei!

• Collecting "Sparrows," the dramatic return of the demon Jei, and "The Darkness and the Soul," Jei's long-awaited origin, plus the Usagi short from Free Comic Book Day 2009.

• Introduction by Charles Solomon of the Los Angeles Times. 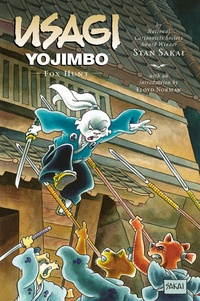