Written by Husbands creators Jane Espenson (Buffy the Vampire Slayer) and Brad Bell, this is the comic-book continuation of the sitcom phenomenon. Husbands tells the story of famous gay newlyweds Brady and Cheeks, who sparked a media firestorm when they woke up legally wed after a drunken Vegas weekend. Now, a mystical wedding gift launches the couple on a series of adventures —a tongue-in cheek journey through iconic genre realms filled with obstacles that threaten to tear them apart. Follow Brady and Cheeks into a superhero showdown, a fairytale fantasy, a Holmesian mystery, an epic galactic battle, a madcap high school romp, and a saucy secret-spy thrill ride. Includes bonus "making of" material and a special introduction.

• Original stories by web series writers Jane Espenson (Buffy the Vampire Slayer, Once Upon a Time) and Brad Bell (AKA Cheeks)!

• Husbands had half a million viewers in the first month of Season 2!

"Espenson and Bell are re-writing the rule book and drawing bunny ears around the phrase television."–Nerd Bastards 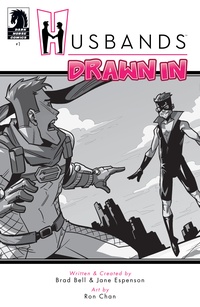