Writing, drawing, and editing a monthly Tarzan comic-book series in the 1970s, Joe Kubert was able to illustrate the adventures of his childhood hero and produce some of the most inspiring pages of his career. Dark Horse Comics is proud to present this final collection in a series of Joe Kubert's complete Tarzan comics. Tarzan: The Joe Kubert Years Volume Three features an incredible, four-part adaptation of Edgar Rice Burroughs' 1934 adventure novel, Tarzan and the Lion Man. Tarzan attempts to protect two beautiful actresses and a Hollywood production crew from the many dangers lurking in Africa's jungles . . . and from a deranged geneticist who calls himself "God." This volume also includes previously unpublished pages of Kubert's original Tarzan notes and thumbnails from the early 1970s, the Tarzan stories "Moon Beast," "The Magic Herb," and "Ice Jungle," and a Korak, Son of Tarzan, tale, "Leap into Death," which was inked by Russ Heath.

• A great reference for students of comics art and the human form in action!

• Represents a key period in Kubert's career, when he was juggling roles as Tarzan's editor, writer, and artist. 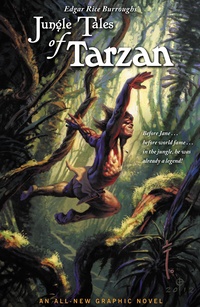