Read Now Checkout Pre-Ordered Manage Pre-Orders
Unavailable for purchase in Your credit card on file lists an address in . If this is incorrect, please update your payment information.
Read Now

Hello, and welcome to a special advance look at the second wave of BERGER BOOKS!

I love working with writers from different creative fields. Our new books showcase immensely talented authors — some of whom are making their auspicious comics debut.

TV writer Christopher Cantwell weaves a strange and poignant tale about paranoia and obsession in She Could Fly; novelist Darin Strauss and short fiction writer Adam Dalva reimagine a classic Dickens character in the futuristic Olivia Twist; science-fiction author Nnedi Okorafor tells a universal story of aliens and immigrants trying to make it in a new land in LaGuardia; journalist and comics legend Ann Nocenti cultivates a heady, romantic, and dangerous sci-fi thriller in The Seeds, her first-ever creator-owned series.

Ten years ago at Vertigo I published novelist and TV writer Jonathan Ames’s funny yet wrenchingly sad graphic novel, The Alcoholic. It remains so powerful and resonant I had to publish it once again in a special new edition.

Collaborating on, envisioning, and bringing these stories to vivid life are an amazing group of unique and distinctive artists: Martín Morazzo, Emma Vieceli, Tana Ford, David Aja, and Dean Haspiel.

And, yes, I am one lucky editor to be working with all of these talented folks. Thanks for taking a look and let us know what you think!

SHE COULD FLY An unknown woman flying at fantastic speeds and spectacular heights suddenly explodes mid-air. No one knows who she was, how she flew, or why. Luna Brewster, a disturbed 15-year-old girl, becomes obsessed with learning everything about her while rumors and conspiracy theories roil. Will cracking the secrets of the Flying Woman lead to the liberation of her troubled mind? By Christopher Cantwell (co-creator/showrunner of AMC’s critically acclaimed Halt and Catch Fire) and artist Martín Morazzo (Ice Cream Man, Nighthawk, Elektra) with color by Miroslav Mrva. Four issue miniseries.

OLIVIA TWIST To save a boy she barely knows, teenage orphan Olivia Twist joins the Esthers, a rag-tag girl gang of thieves running free in a dangerous future. Her life in this London of internment camps and strange technology gets even more complicated when she discovers that she has more power and wealth than she’s ever dreamed of. But it comes at a great cost. By Darin Strauss (National Book Critics Circle Award Winner for Half a Life, Chang and Eng) and Adam Dalva (Tin House, Guernica). With art by Emma Vieceli (Vampire Academy, New Adventures of Supergirl, Breaks) and color by Lee Loughridge. Four-issue miniseries.

THE SEEDS In a world much like our own, people are destroying their phones and moving to the lawless tech-free Zone B. Strange visitors wander the Zone, collecting samples of life, as if soon there will be none. Girl meets alien meets journalist in this eco-thriller love story. By award-winning artist David Aja (Hawkeye, Immortal Iron Fist) and filmmaker & journalist Ann Nocenti (Daredevil, Catwoman). Four-issue miniseries.

THE ALCOHOLIC (Tenth Anniversary Expanded Edition) Critically acclaimed, this is the heartbreaking yet hilarious tale of a boozed-up, coked-out, and sexually confused writer. A hopeless romantic, he careens from one off-kilter encounter to another in a mad search for himself. Unfortunately, it always seems to take him to the bottom of a bottle. By Jonathan Ames (Wake Up, Sir!, You Were Never Really Here, HBO’s Bored to Death, and Starz’s Blunt Talk). Drawn by Emmy Award-winning artist Dean Haspiel (American Splendor, The Red Hook). Includes a new illustrated prose piece by Ames and Haspiel. Trade paperback. 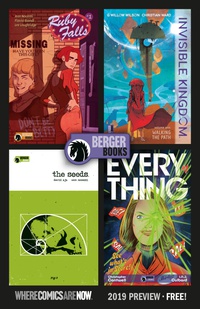 Read Now Checkout Pre-Ordered Manage Pre-Orders
Unavailable for purchase in Your credit card on file lists an address in . If this is incorrect, please update your payment information.
Read Now
YOU MIGHT ALSO ENJOY