Worlds of Amano provides a rare look inside the creative process of one of the most influential popular-culture artists working in Japan in the last thirty years.

Originally published in France, Worlds of Amano presents a unique overview of Yoshitaka Amano's diverse work. This vast introduction allows one to take in the full measure of the immense talent of this famous Japanese illustrator, who is so well known for his designs of the Final Fantasy video games.

Eclectic and apparently without limit, Amano's art is stunning. Drawing on numerous projects from over the last thirty years with many rarely seen illustrations, this book captures the rare beauty and inspiration of Amano's vision.

Please be aware that this art book has not been optimized for small screen devices. Unlike our comics and graphic novels, it does not include the "panel zoom" feature. However, as always, our app users can utilize the "pinch-to-zoom" feature of their device to enlarge the text and images. 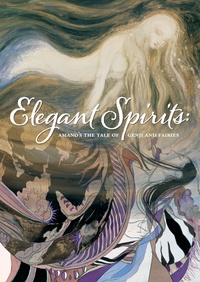 Drawing Down the Moon: The Art of Charles Vess

The Art of Emily the Strange

The Legend of Zelda:

The Art of He-Man and the Masters of the Universe

The Art of Splatoon